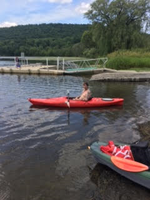 Mario A. Pevo, 54, of Alpine, died on Saturday, November 28, 2020. He was born in Montour Falls, NY, on April 6, 1966, the son of Jack and Eleanor (Hibbard) Pevo. He graduated from Odessa-Montour High School and served with the US Navy from 1985-1989. He was predeceased by his father, Jack Pevo, and by his brother, Peter Pevo. He is survived by his mother, Eleanor Pevo; sisters, Jacqueline Romanki (Steve) and Elisa Millspaugh (Fred); sister-in-law, Becky Pevo Bond; and by many close friends. Services will be held privately by the family. Burial will be in St. Mary's Cemetery, Watkins Glen. Funeral arrangements are under the direction of Vedder-Scott & Zinger Funeral Home, Montour Falls.