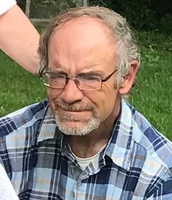 Gary Kevin Lawrence, 57, of Montour Falls, died on Sunday, November 22, 2020 at home. He was born in Blossburg, PA on July 30, 1963, the son of Gerald Lawrence and Theresa Clark. Gary graduated from Odessa-Montour High School and served with the US Navy for six years as a cook. Gary was a family man and well known in the community. He was the type of man that would take the shirt off his back and give it to you. He was the type of person that would not take no as an answer. He was always there when you needed him and always there with an "I love you". You would always find him with coffee, smokes, and his lottery tickets. He was also known as a "taxi guy". He was predeceased by his father, Gerald Lawrence in 1974, Mother, Theresa Clark(Lawrence Wytrwa) Winton in 2015, brother, Edson (Ted) Lawrence in 2019, brother-in-law, Kenneth (Ken) E. Gridley, Jr. in 2017, and by his aunt Pat Clark in 2020. Surviving are his four sisters, Sandy (Frank Just) of Montour Falls, Dawn (Dan) Stillwell of Ithaca, Darlene Gridley of Montour Falls, and Tina (Gregg) Stiles of Morristown, TN; four brothers, Bruce (Mary) Lawrence of Montour Falls, Dusty (Charlene) Lawrence of New Woodstock, NY, Phillip (Wendy) Wytrwa of Trumansburg, and Scott (Brent) Wytrwa of Montour Falls; special friend, Roxie Parker of Burdett, many nieces, nephews, great nieces and great nephews. Relatives and friends are invited to call on Friday, December 4, 2020 from 5-7 pm at Vedder-Scott & Zinger Funeral Home, 122 N. Genesee St., Montour Falls. Burial will be in Woodlawn National Cemetery in Elmira at a later date. In lieu of flowers, contributions may be made in his memory to the VA Medical Center in Bath, NY.