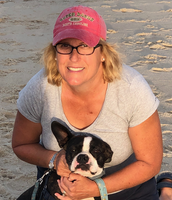 Kimberly Sue (Chapman) Smith, 55, of Alpine, NY, went to be with her Heavenly Father on Sunday, September 20, 2020. She was born in Ithaca, NY on October 3, 1964, the daughter of Stanley and Jeanne (Gunning) Chapman. Kim graduated from Odessa-Montour High School in 1982 and Arnot Ogden School of Radiologic Technology in 2004. Kim was many things but her greatest joy in life was her family. She was a proud mother and grandmother who spent countless hours with her grandchildren. Whether it was hiking through the woods, visiting the beach, attending sporting events, teaching them to garden or play a new board game, she did it all. She made family dinner every Sunday after church and for any special occasion. She enjoyed bowling, playing dominoes with her friends, sewing and listening to Christian music. Kim worked as a Radiologic Technologist at Cayuga Medical Center for 16 years and was a member of Ithaca First Assembly of God. She loved unconditionally and helped in any way she could. We were lucky to have her and she will be sorely missed. Kim is survived by her husband of 35 years, Charles Smith; four sons, Justin (Beth) Smith of Lewisburg, PA, Nicholas (Casie) Smith of Alpine, Lucas Smith of Alpine, and Matthew (Dawn) Gleason of Goldsboro, NC; her mother, Jeanne Chapman of Alpine; sister, Kelly (Mark) Hasselwander of Queensbury; brother, Douglas (Tracy) Chapman of Alpine; five grandchildren, Caleb, Wesley, Dalton, Silas and Sawyer Smith; and by many aunts, uncles, nieces, nephews and cousins. She was predeceased by her father, Stanley Chapman. Relatives and friends are invited to call on Saturday, September 26, 2020 from 10-12 at Ithaca First Assembly of God, 197 Bostwick Rd., Ithaca. Her funeral service will follow at 12:00 pm. Burial will be in Laurel Hill Cemetery. In lieu of flowers, contributions may be made to Ithaca First Assembly of God, 197 Bostwick Rd., Ithaca, NY 14850 or Ronald McDonald House Charities of CNY, 1100 E. Genesee St., Syracuse, NY 13210.