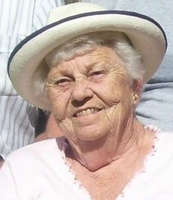 Gertrude Idella Morgan Robinson, On July 11, 2020, Gert has moved on to her next party, she lived her life to the fullest. She resided in Montour Falls, NY at the Catherine Court and enjoyed all of her friends. She passed away at the hospital after having health issues. She was a 25 year old in a 92 year old body. Born May 14, 1928 in Shunk, PA., She was the daughter of Lester and Mary (Bohart) Morgan. As a child she was in the Morgan Family Band which had performed at several locations including their own family dance hall. She played many musical instruments and did not read music. She had worked at many known businesses such as the Canton Diner, Eclipse Machining Plant, Gerber's Grill, Morrisons and Trifoso's Restaurant. After moving to Florida in 1982, she had retired from the Ocala National Forest in 1998. She was a charter member of the Montour Falls Moose Club and Eagles Club in Ocklawaha, FL. She is survived by her son, Lester Hilfiger (Brenda) of Canton, PA, daughter, Barbara Kraus (Chipper) of Millport, NY, daughter, Paulette Robinson ( Dave Stocum) of Pine Valley, NY, brother, Ronald Morgan (Linda "Fritz") of Troy, PA, sister-in-law's, Barbie Morgan of Ocklawaha, FL, Myrtle Morgan of Gillett, PA and brother-in-law Philip Doud of Canton, PA. She was the proud grandmother of her eight grandchildren, twelve great-grandchildren and numerous nieces and nephews. In addition to her parents, she was preceded in death by her husband George R. Robinson as well as her siblings Harold, Harmon (Mutt), Geraldine (Rathbun), Morris, Marjorie (Doud) and Richard. A celebration of life for Gertrude will be held on Saturday, August 22, 2020 from 2-5 pm at the Montour Moose Club, 2096 State Route 14, Montour Falls.