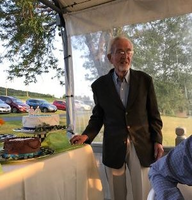 Joseph W. Stevenson, Jr., 92, of Montour Falls, died on Thursday, June 25, 2020. He was the husband of the late Elizabeth Stevenson to whom he was married to for 40 years. Born in Gettysburg, PA on September 13, 1927, Joseph was the son of the late Joseph, Sr. and Florence (Gottschall). He served his country in the US Navy and was a graduate of Gettysburg College. Joseph was the Vice President of Seneca Supply in Ithaca during the 1960's and 70's. In the 1980's until presently, he was the owner and operator of West Hill Tree Farm. He was a talented artist and woodworker. Many of his paintings highlight Finger Lakes landscapes. He was also an avid tennis player. He is survived by his sons, John Holt and Joe Stevenson; daughter-in-law, Sydney Stevenson; grandchildren, Brent and Mackenzie Stevenson; and loving companion, Carol Franzese. A private memorial will held at the convenience of the family. Arrangements are under the direction of Vedder-Scott & Zinger Funeral Home, Montour Falls.