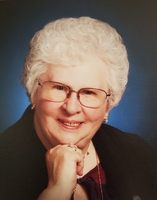 Beverly Ann Bauman, 85, of Montour Falls, passed on Sunday, November 7, 2021 at Schuyler Hospital. She was born in Corning, NY on September 16, 1936, the daughter of the late Howard James Miller and Marion Elizabeth (Harris) Miller. Beverly would tell the stories of growing up on the Lindley farm. She was a homemaker, and she enjoyed raising her children and spending time with her grandchildren and great grandchildren. She liked to go shopping and getting her hair done. Early on Beverly was a member of Lindley Community Church, and after marrying Don, became a member of Glen Baptist Church in Watkins Glen. She is survived by her husband of 53 years, Donald David Bauman; three daughters, Barbette (Clay) Hagood, Karen (Mark) Isaacson and Elissa (Kevin) Gleason; one son, Richard (Susan) Michael; a brother, Gary (Patsy) Miller; eleven grandchildren, Michael, Kevin J., Kara, Kevin D., Shauna, Andrew, Nathaniel, Ashley, Brooke, Christopher, and Joseph; and twelve great grandchildren, Kaylee, Anthony, Reign, Teagan, Camden, Landon, Elijah, Caleb, Josiah, Seth, Asher, and Lorelei. She was predeceased by her brother, Alan Miller. Relatives and friends are invited to call on Saturday, November 13, 2021, from 10:00-11:00 am at Glen Baptist Church, 3311 Reading Rd., Watkins Glen. Beverly's funeral service will begin at 11:00 am followed by burial in Montour Cemetery. In lieu of flowers, contributions may be made to the charity of your choice.